The Deer Park chemical fire started Sunday, March 19, 2019, at the Intercontinental Terminals Company (ITC) in Deer Park. The fire started with one tank and quickly spread to 8 tanks. The fire burned for four days before finally being extinguished around 3am Thursday morning. 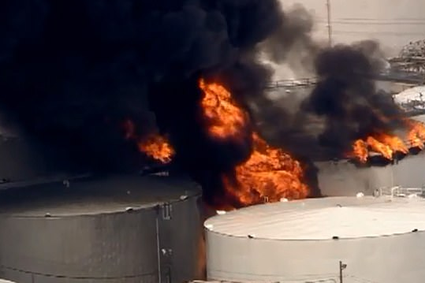 ITC has a History of Violations

Intercontinental Terminals Company has a history of ignoring the law and numerous violations. Records show that ITC has violated the federal Clean Water Act in at least nine of the last twelve quarters. In addition to all the chemicals that have been released into the air, the black plume of smoke reached all the way to Austin.

Benzene is a chemical that is a colorless or light yellow liquid at room temperature. It has a sweet odor and is highly flammable. Benzene evaporates into the air very quickly. Its vapor is heavier than air and may sink into low-lying areas. Benzene dissolves only slightly in water and will float on top of water. It is a known carcinogen according to the World Health Organization (WHO) and Centers for Disease Control and Prevention (CDC).

Symptoms of Exposure to Benzene

According to the Centers for Disease Control and Prevention (CDC) signs and symptoms of exposure to benzene include:

In addition to exposure to benzene and other chemicals, many refinery accidents also result in burn injuries and explosion injuries.

Anytime an explosion or fire happens, many nearby plants get as many deliveries as they can as quickly as possible. Chemical plant management knows that the roads nearby are frequently closed in these type of situations. As a result, many contractors, delivery drivers, and hot shot drivers have made deliveries to ITC and nearby plants since Sunday. In addition, many of these drivers and contractors have had to shelter in place since approximately 2:30am, Wednesday morning because of extremely high benzene levels. It is not known how long there will be elevated levels of benzene or how long the shelter in place will last.

If you or a family member has been exposed to benzene, it is critical to contact the Law Office of James Zier, P.C. as soon as possible. Mr. Zier will personally speak with you to explain your options and will do everything in his power to hold those responsible accountable. Contact us at (281) 485-3377.

Thank you for your message. We will contact you as soon as possible.