​
Airbags have been required in all passenger cars since 1998 and in all SUVs, pickup trucks, and vans since 1999. Airbags are designed to save lives and in most cases they do. According to the National Highway Traffic Safety Administration (NHTSA), in 25 years nearly 40,000 lives have been saved by frontal air bags. 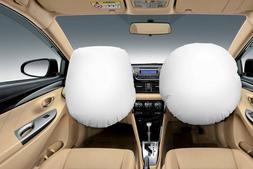 How Airbags Should Work

What Happens In Vehicles With Defective Airbags

Even though airbags usually reduce the likelihood of severe injuries and death in car accidents, when airbags malfunction they actually do the opposite. When a car accident occurs in a vehicle with a Takata airbag or other defective airbag, serious and even fatal injuries frequently occur. Sometimes the chemical in the inflator can spray the face and eyes of the occupants which can cause severe chemical burns and even blindness for the accident victims. The inflator can also explode causing high velocity shrapnel to travel throughout the cabin which can cut and even kill the occupants. Severe brain injuries, chemical burns, and death are frequently the result of car accidents with defective airbags. Even more troubling is that relatively minor traffic accidents can result in traumatic brain injuries (TBI) and/or death when defective airbags malfunction.

Takata has known about its defective airbags for more than a decade. However, instead of fixing the defective product and recalling the airbags, Takata chose to hide it from the public. This is a classic example of a company putting profits above public safety.

Takata airbags were installed in tens of millions of US vehicles. In addition, millions of automobiles have fake airbags because some unethical repair facilities replace used airbags with fake airbags to save money. The Law Office of James Zier, P.C. will not allow manufacturers, car companies, repair facilities, or their insurers to put profits above the safety of the consumer.

If you or a loved one has been seriously injured or killed because of a defective or malfunctioning airbag, contact Pearland accident and injury attorney James Zier at (281) 485-3377 as soon as possible. He has more than twenty years of experience and won’t rest until the companies responsible for your tremendous grief are held accountable.

Thank you for your message. We will contact you as soon as possible.
View on Mobile